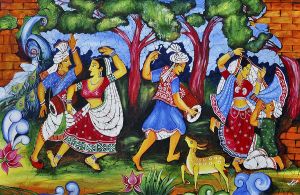 Maithili is a language spoken in mithila region . Maithili came from the word Mithila, region , an ancient kingdom of which King Janaka was the ruler.. Maithili is also one of the names of Sita. Sita is known as daughter of earth as she was stumbled upon in ploughed field (Bhūmi Devi ) by King Janak
Mithila region also popularly known as Tirhut &Tirabhukti, mainly located in the Indian state of Bihar and extends into the eastern Terai of Nepal . This area is surrounded by the ganges in the southern region the Mahananda in the eastern and the Gandaki in the west and by the foothills of the Himalayas in the north.
The native language in Mithila is Maithili, and its speakers are called as Maithils. Mithila , the ancient territory was the epicenter of this language . and hence also known as Maithili. A few also called tirhutia . Mithila area ranges from Tirhut, Darbhanga, Kosi, Purnia, Munger, banka, sahebgunj, Bhagalpur and some areas of santhal pargana like Godda,deoghar dumka and pakur adjoining districts of Nepal. In Nepal, Maithili is spoken mainly in the Outer Terai districts including Sarlahi, Mahottari, Dhanusa, Sunsari, Siraha, Morang and Saptari Districts. Janakpur is an importantand significant linguistic centre of Maithili . Maithili is one of the 22 recognized Indian languages. In early stage Tirhuta was the primary script of Maithili and by the time it got transformed into kaithi and Devanagari .
Mithila came into existence after being settled by Indo-Aryan peoples who established the Videha kingdom. Janakas were called king of Videha kingdom . The most popular Janak was Seeradhwaja Janaka, father of Sita. In Videh Janak, there were 52 kings .

During 19th century, a few linguistic pundits considered Maithili as a range or dialect of bihari languages. Hoerne showed that it is more similar to Bengali language then hindi and he compared it with Gaudian languages . It was Grierson who recognized Maithili as distinguished language and published the first grammar between 1879- 1881.

There is a popular movement going on in Nepal for Mithila province for Maithili speaking areas in Nepal . There are 7 province and mithila activist want Province 2 to be Mithila Province
In Nepal, Maithili is spoken mainly in the Outer Terai districts including Sarlahi, Mahottari, Dhanusa, Sunsari, Siraha, Morang and Saptari Districts. Janakpur is an important linguistic centre of Maithili.
Calcutta University recognized Maithili in 1917, and other universities followed suit.
In 1965, Maithili was officially accepted by Sahitya Academy, an organization dedicated to the promotion of Indian literature.
In 2002- 2003 ,Maithili was recognized on the VIII schedule of the Indian Constitution as a major Indian language; Maithili is now one of the twenty two national languages of India.

In the UPSC Exam, Maithil language is included as an optional paper
In 2007, Maithili was included in the Interim Constitution of Nepal 2063, Part 1, Section 5 as a recognized Nepalese language.
In March 2018, Maithili received the second official language status in the Indian state of Jharkhand & Bihar.